A preview track from the Phoenix Piano Trio’s recording of trios from 1840s Leipzig:

We’ve recently been recording trios from the fascinating melting pot that was 1840s Leipzig, with all sorts of connections between various composers. The first disc will be released in March on Stone Records, featuring Robert Schumann’s exuberant Trio in F, Op.80 (listen to the first movement above); the ‘Fünf Noveletten’ of the Danish composer Niels Gade, a close friend of the Schumann’s; and the fiery C minor Trio of Mendelssohn, also a friend and colleague. Later in 2020 we will release Volume 2, which will include Clara Schumann’s magnificent G minor trio, which should be heard much more frequently, and the mighty B major trio of Johannes Brahms, Robert’s protégé and Clara’s close friend.

We hope you enjoy the sample on this page; keep an eye out for further news. 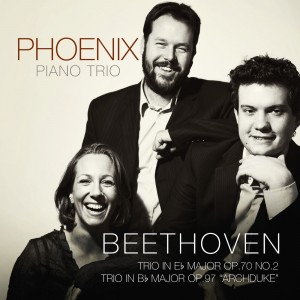 Recorded live in 2011 (before Christian Elliott joined the ensemble) The Phoenix Piano Trio’s debut CD of Beethoven trios features the glorious E flat trio, Op. 70 no. 2, and the ever-popular ‘Archduke’. The disc was recorded live at the Holywell Music Room, Oxford, during the Phoenix Piano Trio’s Beethoven Cycle in 2011, and was released on Stone Records, with a launch at Wigmore Hall in 2012.

“At a time when special Beethoven seems to be the norm [The Phoenix Piano Trio] presents extra-special performances of the two key piano trios in Beethoven’s output. Their approach is deep and karmic, using the space between notes to flesh out line and structure to develop a musical narrative of tremendous, involving depth. Throughout both trios, the Phoenix Trio strings together the nearly 80 minutes of glorious episodes so organically that the music becomes one seamless musical fabric… Beethoven’s rich palette is captured with magnificent audiophile detail.” (Strings Magazine)

“It’s the outer movements of the Archdule where the Phoenix seem to have the most to say, shaping the opening Allegro Moderato effectively and setting a purposeful pace in the finale.” (Gramophone Magazine)

“[Op. 70 no. 2] really allows the Phoenix’s integrated sound to shine, with a delightful conversation between piano, violin and cello taking place to a particularly catchy tune in the third movement.” (Oxford Times)